Abnormal weather patterns in the upper atmosphere over Antarctica dramatically limited ozone depletion in September and October, resulting in the smallest ozone hole observed since 1982. The ozone hole that forms in the upper atmosphere over Antarctica each September was slightly above average size in 2018, NOAA and NASA scientists reported today. Measurements from satellites this year showed the hole in Earth’s ozone layer that forms over Antarctica each September was the smallest observed since 1988, scientists from NASA and NOAA announced today.

Ozone treaty taking a bite out of US greenhouse gas emissions

The Montreal Protocol, the international treaty adopted to restore Earth’s protective ozone layer, has significantly reduced emissions of ozone-depleting chemicals from the United States. In a twist, a new study by NOAA and CIRES scientists shows the 30-year old treaty has had a major side benefit - reducing climate-altering greenhouse gas emissions from the U.S.

The Montreal Protocol has been hailed for controlling chlorine-based chemicals that created a vast hole in the ozone layer over Antarctica. But new research by British and American scientists suggest a chemical not controlled by the international treaty poses a potential risk to the Earth’s protective ozone layer.

Fifty years ago, a historic balloon launch that changed the way we see the ozone layer

What started out as a modest research project driven by scientific curiosity provided the agency that would later become NOAA with some of the first insights into how ozone was distributed in the atmosphere.

Antarctic ozone hole about average in 2016

The hole in the Earth’s ozone layer that forms over Antarctica each September grew to about 8.9 million square miles in 2016 before starting to recover, according to scientists from NASA and the National Oceanic and Atmospheric Administration (NOAA) who monitor the annual phenomenon. 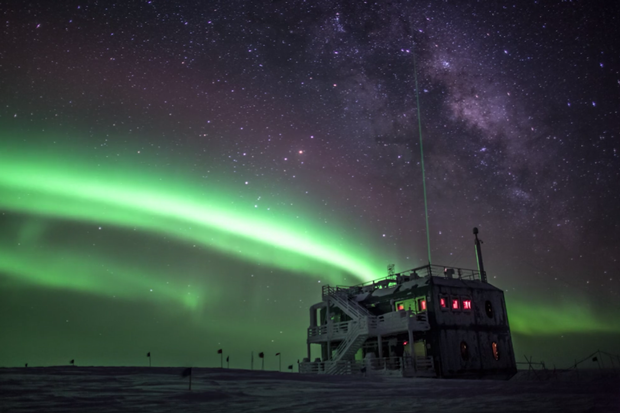 4 ways the ozone hole is linked to climate, and 1 way it isn’t

To mark the peak of ozone hole season, we’re highlighting four ways that climate and the ozone hole are related—and one important way they aren’t.

A deep sea fishing rod is probably not the first tool that comes to mind when thinking about how to study air pollution in a remote inland desert, but it’s the heart of a new NOAA system that has given scientists a minute-by-minute look at how quickly the sun can convert oil and gas facility emissions to harmful ground-level ozone. 2015 Sets a Record Low for Antarctic Ozone Hole in October

NOAA’s measurements of ozone at South Pole registered a record low for the month of October. This year, the average amount of ozone measured by a Dobson instrument at South Pole in the second half of October was 114 Dobson Units (DU), or 60 percent below the pre-ozone hole conditions.

The 2015 Antarctic ozone hole area was larger and formed later than in recent years, according to scientists from NOAA and NASA. The sun rises at the South Pole every Sept 21, after six months of darkness, and the spark of light from the rising sun also starts a season of ozone depletion down south. With the approach of that date in mind, a CIRES/NOAA scientist and videographer has developed a short, educational video that focuses on the ozone research being conducted by NOAA and CIRES scientists.

Encouraging information from this year's observations of the Antarctic ozone hole

For nearly 50 years, scientists with NOAA have launched high-altitude balloons from the South Pole, to understand why a hole was forming in the protective ozone layer high in the atmosphere. Now, organizations around the world track the infamous ozone hole through these ballon-sondes, satellite measurements and ground instruments.